Check out these free SP-1200 samples over at  Goldbaby

This past weekend I DJ'd a gig in what I call "VatoLandia" it's the abyss of LA, east of the 110, south of the 5, north of the 105, and past the industrial zones, that houses deep generations of Latin Americana. Trust, this is not a diss to this part of LA...the house I parked my truck in front of had some fresh Impalas parked in front of it and the family was bumping some Ice Cube and handling it on the BBQ.

I sold my Serato ScratchLive SL1 about two years ago and switched back to vinyl. I was a hardcore SL1 user since it was released back in 2004 but never cared for the "advanced" features the software included. I hardly ever looked at the screen when I DJ'd. In the early years I used a PIII 900 Sony laptop with 512mb of ram that had a broken LCD screen. At home I used the laptop hooked up to an external screen. At gigs the laptop ran SL1 beautifully and all I needed to see was the library section of the screen. I got used to this and wished Serato would release a super light version of the software where the wave forms and deck controls are practically eliminated.  All I really need is the library view...well, they eventually did it in version 2.0 of the software but there is room for improvement in their interface.

I digress. For a lot of the private parties I DJ I play a lot of music that doesn't exist on vinyl. Mainly newer Salsa, Merengue, and Cumbia tunes. So, I switched to a cheaper solution to DJ these types of gigs: Traktor and the on-board sound card on the laptop. Randomly, the sound card on my laptop shorted out at a gig so I needed to go with a USB or firewire solution. I used an M-Audio ProFire 610 for a while but this unit was bigger than I wanted it to be. Even though I sold it, I'd get another one for live music performance with MIDI gear. A better solution was getting a Native Instruments Audio2 DJ USB 2.0 box and using Traktor. 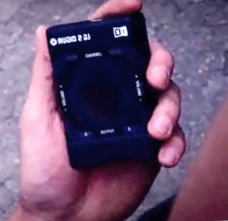 The unit is small. It has two independent volume controls on the side, two stereo audio outputs (stereo 1/4 to stereo RCA is included). That's it. It's simple, effective, and works great at 44.1k 16bit with medium latency. I went with this solution instead of a similar priced USB 2.0 E-MU 0202 because I have read that the E-MU has driver issues. i needed a rock-solid solution and the size won me over. A $10 BEATPORT card was included which is a plus. I've been looking for some UK Funky and Dubs Step tunes to download.

I've used Traktor for years as a backup DJ tool but recently started appreciating some of it's features when playing out live. Traktor wasn't rock solid in use at first. I realized that part of the problem was the audio ram buffer size. Increase the buffer size and the software performs beautifully. If it's too low...the program crashes. One problem I had with the program was the dragging and dropping of tracks into the decks while another track plays. this is where the glitches would show up, especially when using an external drive. Luckily, I found a working solution that worked well this past weekend after an eight hour DJ session.

I use a Midi controller and two external drives so I needed a 2.0 USB hub because my laptop has two USB slots. The key to making this work was hooking up the drives to the hub and the NI Audio2 DJ directly to the laptop. Here's why. Originally I set up the Audio2 on the hub and noticed I wasn't getting the full features of the device. The Audio 2 allows you to use output A as a master stereo out for Traktor and output B as a stereo headphone out. That means you don't need a mixer. If, however, you want to use a mixer, the Audio2 also functions as a two stereo output device (outputs A1/2, and outputs B 3/4) so you can run then into your line inputs. At home I use the virtual mixer. At gigs I like using my wannabe Rane mixer aka Tascam XS-8. It has an XLR input for a mic, effects loop, and an aux in for iPod hook ups. When I hooked up the Audio2 to the hub, only channel A would work. When I hooked it up to the laptop direct, both outputs worked flawlessly. One of two things are at work here, 1. the device requires a specific bus assignment on the laptop to work properly or 2. the hub doesn't provide true USB 2.0 bus speed. Therefore, I just went with connecting the Audio2 direct to the laptop. Whatever the case, after 8 hours of DJing, the only problem I encountered was when I tried playing WMA files in Traktor. Traktor freaked out. I'm also using an older version of Traktor. I haven't installed whatever came with the Audio2 CD.

I applaud Native Instruments for providing a simple, effective, rock solid piece of gear for digital DJing that isn't overwhelming. I caution Windows users however. Make sure you don't use an audio production laptop running Windows on the internet. As many great audio tools exist, Windows on the Internet is just vulnerable to all sorts of spyware, malware, and viruses. It's a recipe for disaster.

I highly recommend using a clean image and keeping your laptop OFF the Internet. Or, you can do what I eventually did, start running OS X on all your audio boxes.
Posted by Regend at 3:53 AM No comments: