Fashion vs. Music!
saturday night i learned a new phrase...potato sackin. it's when you mack it to a girl that is wearing a potato sack dress and in the back of your head all you want to do is sack her. or, maybe race down a nice green lawn with an equally horrendous potato sack.

JLo i guess is the one who wears a sack pretty well...

Some other females try to rock it like this:

and of course the low budget flavor: 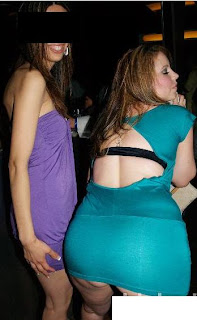 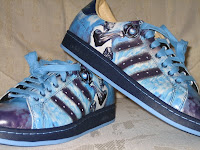 ok, and now for the music portion...

as promised i said i'd explain a lil about my Alicia Key's remix.

basically there's a style of music floating around called GLITCH.

a free VST called Glitch is available that transforms audio.

dBlue the programmer writes: Glitch chops up your audio in real-time and applies a variety of effects which can either be chosen at random, manually sequenced, or a mixture of both. The sounds it generates range from quite subtle to extremely bizarre, depending on how much you tweak the controls.

essentially the entire drum track runs through the glitch software...

the main Reason i use Reaper is because it allows me to simulate DJ tricks using the VST on/off (see pic below) as well as the mute/solo buttons...i do similar things that i would use a crossfaders in order with to make the drums drop out or to drop out the VST's effect.

here's the thing though...Reaper does something truly unique for such a light program...back in the days before DAWS every time you did a mixdown on an analog board you and an engineer and your book of notes and pencil and tape would, in real time, perform a mix...at such and such time inthe song pan or volume fade or hit solo or hit mute...etc...once this was printed to tape...if you effed up a mix you have to go back and re do that edit...or splice things in later. Reaper has a feature for REALTIME mix downs meaning...while the song plays in real time it renders your manual edits so if you have a controller you can perform your mix down instead of using automation tools...so essentially i can perform mixdowns in real time and each is unique.

i could automate...but this is fun and keeps me in the DJ mode that i like to be in.

the main problem i had was using a PIII 1.13 mhz T23 running XP with 512mb of ram...great for Serato because i have access to a bunch of old T23's (i roll with two in case one breaksdown) and they are cheap but not so great for multitrack audio and effects. i've since upgraded to a 1.7mhz P4 T42 with 768mb of ram.
Posted by Regend at 9:32 PM

are you for real? really expentin' your readers to continue reading this entry after you post such grotesque fattie legz.

maybe you and potato sack girl can go on a date. your new $20 shoes match her shit.