So on Twitter, a couple famous DJ's in the game have been posting up pics of their 45" and 12" collections. Some of these records are hard to find or just classic material.
I don't make any claims about having rare records or hard to find records but I do have my own digging stories.
One thing that really bugged me out when I first started DJing back in 92 was you either had to buy records with your own loot, steal records, or get on people's nice list and get records for free. DJ's that hustled the club circuit and radio would get "serviced" and receive free records from the labels. I know several DJ's that got crates and crates worth through their college or commercial label hustle.
I was one of those college radio DJ's. I obviously picked the wrong school for college radio but nonetheless it was a great experience. In terms of getting records during this time I just wanted Hip-Hop records. For me, college radio was a way to get records for free and that was pretty much it. At the time, anything free from labels was schwag for for our station so even if we got t-shirts it was good promo material.
One day I called the promo team at Bad Boy and asked if I could have a copy of Dreams by BIG. Guy on the phone was obviously busy and told me that the song wasn't official because they couldn't clear the sample prior to releasing Ready To Die. I bought the LP of Ready to Die only which was missing stuff on it but it was a legit Bad Boy commercial release. The CD had interludes that are now super famous. So for years I had never heard the full version of the album and was totally tripped out that they had left off songs and interludes on the copy I bought. I felt a little cheated. In those days though...what did I know? Eventually Bad Boy would release the entire album as a two album set. Back to Dreams...I wanted that song SO BAD! The label rep I spoke to on the phone lied to me too. He said that song was not available yet I heard it on mixtapes that made their way from NYC. So I figured that was a record I would never get. Until one day I was DJing at a private liberal educational place and found the 12" to Juicy. I copped it. I had to have it. It had Juicy, Unbelievable, and Dreams on it. Here's a pic of the original 12" I have: 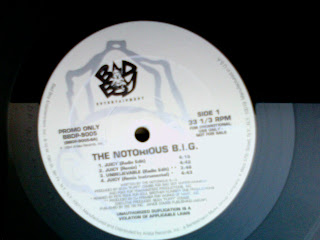 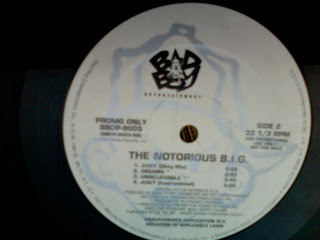 In my most gully Beatnuts mode the 12" became mine.
Here's the obligatory YouTube link for Dreams.